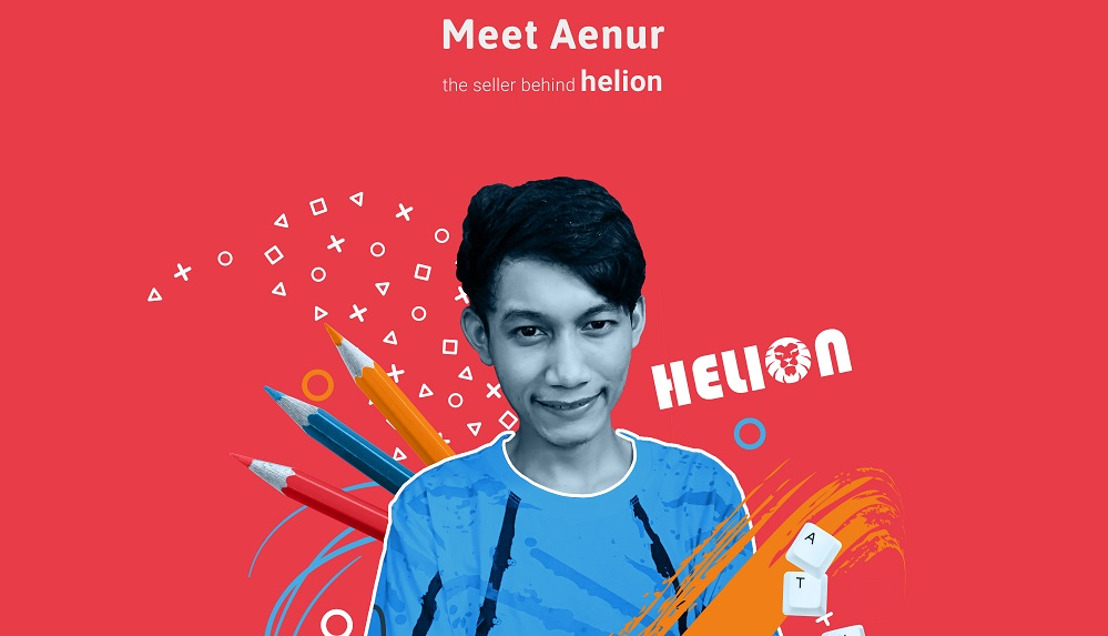 Many AnyTask users are very experienced and immensely talented freelancers who, for years, have been working on many other leading freelance platforms. That is the case of Indonesian freelancer Aenur Ridwan, who goes by Helion on AnyTask.

Mr. Ridwan is arguably one of the best freelancers on AnyTask, with at least 90 very positive reviews across eight or nine different task categories.

For example, an AnyTask buyer identified as Emanh said that he got “great value for the price. Helion was creative. Will buy from again.”

Tan8312 said Helion was very quick at coming back with a completed task, while Geoffrey said Helion was “Super quick and (delivered a) beautiful design. He also proposed some variations. I recommend and will book again.”

Pledgie said Helion is a “Great seller! Excellent work and very quick! I would buy again.” DrJanitor said, “Wow! Top-notch logos delivered much faster than I was expecting. Better ideas than I could’ve imagined. Thanks, Helion!”

Aenur is 20 years old and majored in Network Computer Engineering during his Vocational High School years at SMK Bina Utama Kenda. Apart from being an avid freelancer, he is also building his business app. He is also involved in game development and graphic designing, traits that have made him one of the best on AnyTask.

Ridwan looks back to remember when he started freelancing. “I forget exactly when I started, but I have been involved for several years now. My hobbies are graphic design, drawing, and painting – skills, which I am very passionate about and use them for additional income.”

He says he has acquired many skills and vast experience from working on 99Designs. Helion says he spends a lot of time in front of the computer, expanding his skills through Google and YouTube tutorials and that his “highest priority right now is buyer satisfaction.”

“I have tried to be a freelancer on almost all the famous freelance platforms, but I prefer 99Designs to add skills and experience with a class of large companies that are able to open a contest with prizes."

"I also like AnyTask with no fees for sellers and fast payments," he said. AnyTask does not charge sellers any fees or commissions on sales unlike other leading platforms that charge up to 20% and take weeks to make payment to freelancers after their tasks are approved. On AnyTask, payments takes minutes after the buyer accepts the work.

Aenur said he believes the website needs improvements, "but AnyTask is very user-friendly for the seller. This AnyTask platform is quite revolutionary and unique from other freelance platforms.

Mr. Ridwan is from Jungsemi, in Central Java, Indonesia. It is a small touristic village of about 6,000 in population. People are mostly dedicated to farming because the town benefits from a variety of rivers that help the soil to be very fertile for agriculture and plantations.

Others work in the confection of clothes, including uniforms, and their traditional balls stuffed with balloons. Other than that, there are few other job opportunities, but that has not stopped Helion from taking advantage of the benefits of having access to the global digital economy.

Freelancing could be a solution worth exploring for many youths in a country where the median age of the population is 30 years, and poverty and being unbanked is still a significant barrier to national prosperity.

It is also an interesting marketplace given that 11% of the population own cryptocurrency, demonstrating there is a rapidly growing level of adoption, according to Asia Times. It is, in fact, the sixth country with the highest level of crypto ownership amongst its population.

AnyTask, in particular, is a very viable option for Electroneum’s 100,000 registered users in Indonesia, a country that ranks 14th globally in terms of the number of freelancers with nearly 20,000.